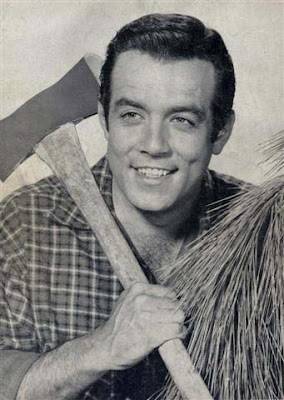 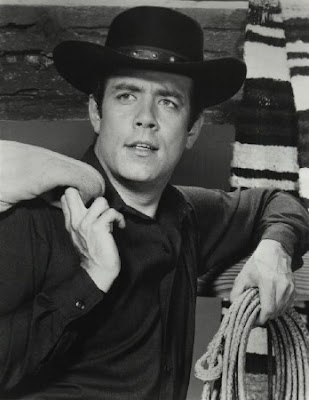 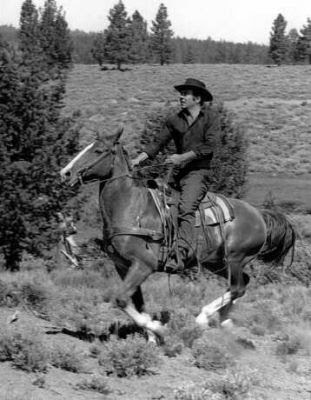 Pernell Roberts
1928-2010
A friend just emailed me the sad news that Pernell Roberts passed away on January 24 from cancer at the age of 81.
I knew it had to happen some day, but I admit, I wasn't prepared for it. In all honesty, I figured him to live to his 90's at least. And I am crushed.
I've watched lots of TV shows, had lots of actors I respected or drooled over, or both. But out of that huge pool of actors, only two ever rose to the top for me, and the numero uno one was Pernell Roberts.
While he played a variety of roles on TV, film and stage, to me he will always be Adam Cartwright. It's funny--Mr. Roberts was only on Bonanza from 1959-1965, leaving the show a year before I was born. So when I first started watching Bonanza as a tot, there was no Adam Cartwright. I loved the Cartwrights and drooled over the Ponderosa.
But I remember the moment very distinctly when I first saw Bonanza reruns in the mid-70's---suddenly there was this gorgeous, tall, dark-haired, black-clothed man with a hypnotic voice that could melt butter. His character's name was Adam Cartwright. And I can tell you, the first moment I laid eyes on Adam Cartwright, all those other Cartwrights faded into the woodwork. And I loved his tall, rangy chestnut horse, Sport, best of all the Cartwright horses. Still hope to have a Sport of my own one day. 8-)
To this day, it is the image and persona of Pernell Roberts I have in my mind when I am creating male characters for my stories--some element of him always finds its way into my heroic characters. I have never seen an actor as appealing as he always was, even as he aged.
And of course I'm biased, but some of the very best episodes of Bonanza featured Mr. Roberts because he was also a very talented man. One in particular that comes to mind is an episode called "The Dark Gate." What a premise that episode was based on. "What if you're best friend goes insane then goes on a murderous rampage and no one else can stop him?" Pernell Roberts performance in that episode will pull your heart up through your throat.
To this day he gets bad press for his choice to leave Bonanza after six years. But that's one of the reasons I've always respected him. Life is too short to live miserably--or to let anyone else define what success means to you in your career. There's only one who has a right to define who we are--God. No human on earth has that privilege. And doing what everybody else feels is a big mistake takes a lot of guts. I have often wished that when I face difficult decisions, I make them with that same courage.
Ironically, this is one of the few days in the last several that we HAVEN'T had any rain, but it feels like it ought to be raining big-time right about now.
And with Pernell Roberts' passing goes the end of an era. None of the Cartwrights remain. Nor have I yet seen any actors in the years since who can match Mr. Roberts for charisma, presence, good looks and just generally being my idea of the perfect guy.
Thankfully his memory does live on, in the minds and hearts of decades worth of fans, and in those who are inspired by his roles and use them as a springboard to craft their own forms of art.
My prayer is that his family, friends and legion of fans will be comforted by God's loving presence during this time of grief and that we celebrate his life and accomplishments.
Posted by B.K. Jackson at 6:28 PM

I was also saddened to hear of Pernell Robert's death. He was my favorite actor on Bonanza as well. He is the quintessential Western man with his mild manner, his tough action when needed, his kindness toward others. I agree that he was the most distinguished figure on the Ponderosa.

Bonanza has been my favorite show all my life.I continue to watch the reruns almost daily. I have had a crush on Pernell Roberts since the first time I saw him on the show in the early '60s.I was devasted when he left the show,because didn't know when I would see him again. His persona of Adam was my idea of perfect. And his voice melted my heart every time he spoke.
RIP Pernell Roberts

Creativity for Life: Practical Advice on the Artist's Personality and Career from America's Foremost Creativity Coach by Eric Maisel (Jan 2013)

I wrote "The End"

A Great Gift For Writers

The wonders of how God uses different people in our life. And how He orchestrates events.

This is the recurrent theme in my writing of Arizona and other historicals.

I also write devotionals (see "Devotionals For Writers" link above)